Posted on April 28, 2016 by nectonparishcouncil

Necton Community Centre was one of a number of local charities that benefited from a windfall dontation from the three companies involved with the construction and commissioning of the new Dudgeon Wind Farm Sub-station on the edge of the village. 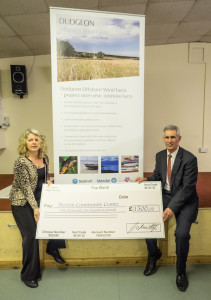 Cllr Sisto, Vice-chair of the NRCC Committee and the Parish Clerk, with the cheque received from Dudgeon Wind Farm.

Statoil, Siemens and Northern Midland Construction plc contributed to a collective initiative promoting Health & Safety at the sub-station site.  With £10,000 secured by workers, nominations were made for its distribution across various local charities.  The community centre was one of these lucky charities and they received a cheque for £1,500 which will be used to upgrade the car parking areas of the centre.

The Breckland View reporter, Paul Young, attended the event and you can hear his report here.

This entry was posted in News. Bookmark the permalink.